One way to make our property investment productive is to rent it out. Because by renting out property, we will get passive income while our assets remain. For example, a house property, we can rent it out on a monthly or yearly basis. However, to keep our house rental business running smoothly, these leases need to be tied to a house rental agreement.

Like a letter, the house rental agreement is made in writing. This is because there is strong physical evidence and it could be used as legal evidence if there is a dispute in the future. In accordance with the rule of law in Indonesia, there are five pieces of evidence that can be confronted in civil law. They are written evidence, witnesses, confessions, oaths, and suspicions. Well, in a house rental agreement, we can have 2 elements of this evidence, namely written evidence and witnesses.

1. There is an agreement between the parties involved in the agreement

2. The parties to the agreement must speak

The parties must be adults, healthy in mind, not crazy, drunk or in impossible conditions. In other words, both parties must be equally aware and have thought about this carefully.

3. There is a certain goal

An agreement must have a clear purpose. So that there is a common direction for the parties to find an agreement.

4. There is a lawful cause

Agreements can only be made for things that do not violate laws or norms. If the agreement is an evil consensus, then legally it cannot be made in the agreement. Make agreements with good intentions for the people involved.

In order to make an agreement stronger, it should be made in front of a notary. Because according to article 1867 of the KUH, with an agreement made before a notary, the agreement letter can become an authentic deed.

Legally, authentic evidence cannot be disputed, unless the dissident has new evidence. Meanwhile, if the agreement is made only between the tenant and the owner of the house, it includes non-authentic evidence that must be re-proven before the court if this rental issue is disputed in the future.

Then, what should be included in the contents of the rental agreement?

1. Data of the parties

In a proper house rental agreement, the tenant and the home owner must clearly identify their identities without any forgery. So, legally it will be known who the legal subject and made the agreement. The identity listed must also match the ID card. This is to avoid criminal threats such as fraud or abuse.

The house that is the object of the lease must have clear data. Everything must be written in detail in the rental agreement letter. For more details, you can also add the location and situation of the house.

3. Rights and obligations of the parties

As a consequence, if there is negligence of obligations or violation of rights, it is also necessary to explain if there are sanctions or fines. So with this clarity, the parties can understand each other’s consequences if they neglect their obligations. For this reason, it is important to include the sanctions for violations in the rental agreement letter.

The signature shows that the owner of the signature has read and understood the contents of the agreement. Meanwhile, the existence of the stamp duty does not determine a valid agreement or not.

Basically, stamp duty is a tax levied on a civil document. Its function is to provide legal value to a document. So if the document becomes evidence in court, then it is known to pay taxes.

Example of a House Rental Agreement 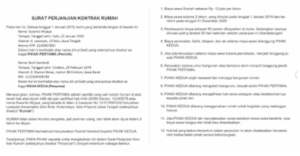 Those are tips from House in making a house rental agreement. Make sure every point written in the agreement is fulfilled, don’t be negligent. Add additional provisions so that if something unexpected happens, it can still be resolved amicably.

Gallery of Example of a Legally House Rental Agreement